In the duty-free marketplace on Cozumel, our intrepid fellows insisted that we have lunch at a local establishment they were already aware of. It’s called Pancho’s, as might be expected in the tourist area, but the food was not typical tourist fare. It was delightful to have real Mexican cuisine instead of the Tex-Mex hybrid dishes so profligate in Texas.

I started off with a coffee, while some of my fellow travelers indulged in frosty adult beverages as seen in a previous blog. The coffee was a locally grown blend, dark and rich, and served with heavy cream. it was so good I almost didn’t order food.

My partner wanted to try a Mexican beer in Mexico. Upon finding out that Dos XX was available on tap, he chose to make that his beverage experience. 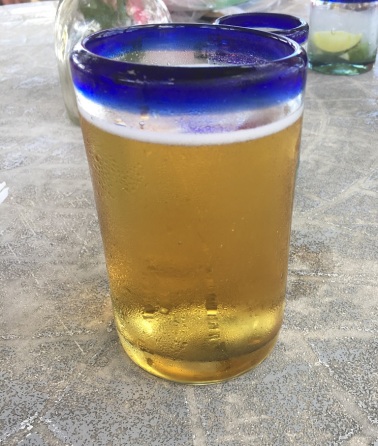 for the meal itself, we went with a couple of dishes we are quite familiar with, wanting to know how they would be served in their homeland. He went with the queso flameado (as we had previously learned to call it), while I settle for the chicken flautas.

The queso came all melty, as we know it, though it came in a shallower dish, and covered in a mild green sauce. It was served with flour tortillas as we are also used to. Somehow it tasted better than anything we had experienced back home.

The flautas were just as I had been told to expect in Mexico. There was nothing added. Roasted chicken was rolled into tortillas and fried. The chicken was flavorful, but without all the crazy spices Tex-Mex utilizes. The sauce it was served with was a little sweet and a lot spicy, just as I had hoped it might be. There was even a large spoonful of guacamole to help cool my tongue after the first taste of that sauce.

We were fortunate to be able to get a table on the “beach” as the hostess referred to it. It was outside on a built up bit of sand, with palm fronds for a ceiling and a view of old coral coastline and sparkling blue water.

We thoroughly enjoyed the laid back atmosphere and the chance to sit and do relatively little for an hour or so. We hope to be able to revisit Pancho’s and try some of the more adventurous items on the menu.