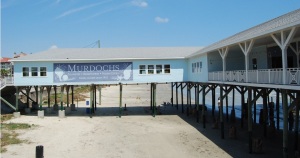 Murdoch’s as seen from Murdoch’s!

Bathhouse? As a matter of history, Murdoch’s was originally a bathhouse that rented bathing suits and provided showers for Island visitors. Built on the sand of the beach in the 1800s before the seawall was constructed.

Racks of conch and clam shells, that have been a Murdoch’s feature since at least the 1960s.

In spite of such storms, Galveston gets an excellent share of sunny days all through the year, but modern visitors are not all interested in getting sand between their toes. Murdoch’s is a full blown tourist trap full of all kinds of souvenirs, but it also has an outstanding spot to relax, have an beverage, and listen to the wind and waves. 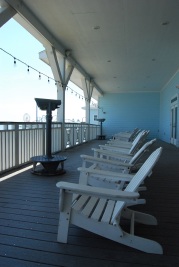 Grab a seat ad relax for a while.

Murdoch’s is a long-standing seawall tradition on the Island, offering seashells and toys, t-shirts and shorts, hats and sunshades, and tons of other cute, kitschy, brightly colored memories of your visit. The building is built out over the surf on piers, just as the original building had been back before Hurricane Ike. There are two entrances leading into wide, airy showrooms, connected by a long stretch that houses more gifts, a bar, and an outdoor covered porch. You can sit in one of the many rockers and simply be, watching tourists on the seawall side, or the waves and gulls and tankers all the way to the horizon. 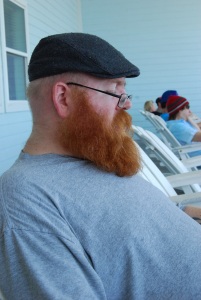 It’s a great place to sit back and relax for a little while in between walking stretches of the seawall, or without having to fight off kids, sand, and overzealous seagulls. 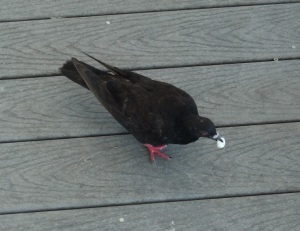 Watch out the for the pigeons, though. As with pigeons anywhere, they beg. They also flock in the area around the building and net beneath it side by side with their seagoing cousins. 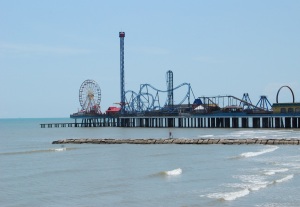 The Pleasure Pier as seen from Murdoch’s.

While we have been to Galveston numerous times, we have yet to make the time to stop in at the Railroad Museum at the end of the Strand. Built inside the former Sante Fe Union Station and an adjoining building, this is the largest museum of it’s kind in the southwest. We understand that it’s an insightful visit to part of American history, a chance to crawl around inside an assortment of period rail cars, as well as an informative look at model railroading.

A steam engine displayed in a museum courtyard.

Shearn Moody Plaza entrance located at 25th and the Strand.

There are over 4.5 acres of exhibits both in and out of doors, and rail cars from the late 19th and early 20th centuries for your self-guided touring pleasure. There are steam engines, mail cars, and even a caboose in the yard. Inside you might imagine what waiting for a train was like in the depot, or get a feel for the opulence of period dining cars.

The Harborside Express, an actual if abbreviated train, runs most Saturdays between 11am and 2pm, allowing passengers a ride in an authentic red caboose.

Your parking is free with paid admission in the lot at 2602 Santa Fe Place, across the street form the Museum entrance. Park for the entire day, visit the museum, and stroll the Historic Strand for shopping and dining.

Group rates are available. The museum may also be rented for special events.

The Railroad Museum is open daily from 10am – 5pm in summer, and 9am – 4pm in winter. The only exceptions are for Thanksgiving Day, Christmas Eve, Christmas Day, New Year’s Day, and Mardi Gras.

Tree sculptures across the street from the Museum.

A friend of ours happened to take a trip to London for the Holidays this year, and gave us permission to use one of his photos for our e-greeting here on TheWanderingTexans.

Please allow us to share with you a vision of the Eye of London by photographer Jay Lee. More of his work is on display in his own blog, Bald Heretic.