My partner, I found out, had never had a real muffuletta. I decided I needed to expose him to my favorite hidden market in the French Quarter, but was saddened to find that it had been washed out by Hurricane Ike and had not been rebuilt. With a heavy sigh, we wandered about for a while before spotting a sandwich board on the sidewalk that mentioned muffulettas.

We actually glanced at each other and shrugged. We would give it a shot. Thus we found Fiorella’s Cafe, an Italian restaurant that offers my new favorite muffuletta in NOLA.

We perused the menu as good foodies will do, but there was no question as to what we would order. We decided to order a whole muff with the intent to each have a quarter and take the rest back to the hotel with us for a snack later. The size of the plate made us think we might actually pull that off. 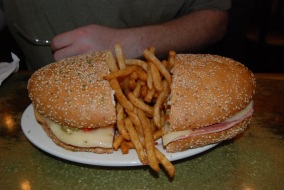 The whole muffuletta, with seasoned fries.

A quarter cut, showing the goodness inside.

That was not to be, however. We tucked in and wound up eating whole thing. Why? It was just that good and after hiking about in the French Quarter, we were just that hungry. 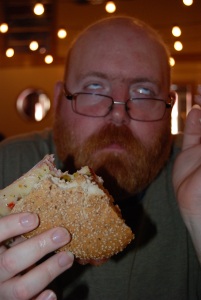 Just in case you didn’t catch that, he loves the muffuletta!