A golden hued spaghetti squash cooks up into long strings of delightfully crisp and slightly sweet “spaghetti”. It is a wonderful ingredient for a wide assortment of dishes, though some people find it a tough cookie when it comes to cooking.

As the name implies, the stringy meat can be used in place of traditional spaghetti with sauce, substituted for pasta in casseroles, tossed into stir fry, or just eaten with a little butter and garlic.

I’ve been shown a quick and fairly efficient way to render one of these thin skinned, tough to cut while raw, squashes.

Remove the stem end of the squash first. This end should have a bump in the middle after it pops off.

Cut the squash into two equal parts. This can be a bit of a chore as the meat is hard in the raw state. If the squash is larger than 2 pounds, you may need to quarter it.

Once the squash is opened up, use a hard edged spoon to scrape the seeds and surrounding stringy material out.

Reserve the seeds for regrowing if you are into that. The stringy material is a slightly darker color than the meat, usually, so you can scrape until you hit the lighter, harder flesh. 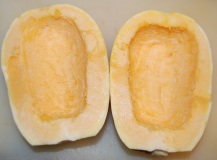 Give the meat a light spritz or rub of olive oil. You may cook the squash in a conventional oven, or in a microwave. The microwave takes a bit less time.

If you plan to roast your squash in the oven, lay the halves face down on a foil lined pan, or spray the pan with olive oil. This will prevent sticking. Set the oven to 350F and let the squash cook for a half an hour or until soft. 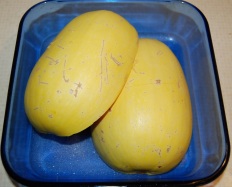 For microwaving, spray a baking dish with olive oil and lay in the squash face down. You may have to repeat the process with each separate piece of squash depending on the size. Cook on high in five minute increments until the rind of the squash is soft when pressed with a finger. Be careful – it will be hot.

The squash may look a little wilted around the edges when you turn the halves over for inspection after cooking. Not to worry, this is normal.

Practice will teach you how long is long enough for your recipe and personal tastes when cooking most squash.

Turn once again to your trust hard edged spoon to scrape the meat out of the skin. Set the stringy meat aside in a bowl to reserve it until you are ready to add it to your recipe. It should scrape easily away from the skin.

Once empty, the skin should look something like this.

Now that you have the process, here’s a quick recipe to let you test your squash with.

Render spaghetti squash and microwave until done. Scoop meat out into a large bow and fold in Alfredo sauce. Cover and set aside.

While the squash is in the microwave, begin the chicken mixture. Add a little olive oil to a large skillet and saute chicken with spices. When the chicken is almost done, add mushrooms, bell pepper, and olives. Continue to cook until chicken is completely done.

Spray an 8×8 or 9×9 baking dish with olive oil to prevent sticking. Turn out the chicken mixture into the baking dish and spread evenly. Sprinkle about half of the mozzarella evenly over the top.

Turn the spaghetti squash and sauce mixture into the dish on top of the chicken and spread evenly. Top with the remaining mozzarella and Provolone cheeses.

Make sure the Provolone is on top as it is a dryer cheese and will melt more slowly than the mozzarella. It will also crust better if you prefer to cook until brown.

Bake at 350F for 30 minutes or until heated through and all cheeses are melted.

Allow to rest for 5 minutes before serving.